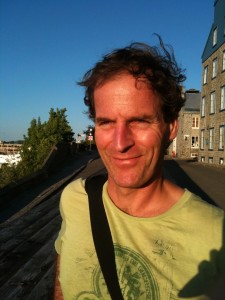 Philip Roy writes children’s books and Middle Reader novels of adventure and historical fiction; his books invite readers of all ages to consider the variety, vastness, and fascination of the world around us. Philip is especially committed to writing works of fiction that are devoted to social, global and environmental issues. Visiting schools is Philip’s favourite part of being a writer.

Philip studied Music and History before choosing a career in writing. Born by the sea in Nova Scotia, Philip has travelled extensively for research on his award-winning Submarine Outlaw/Un rebelle en sous-marin adventure series. Philip has also penned two historical novels including Me & Mr. Bell, (nominated for the Silver Birch, Geoffrey Bilson, Hackmatack and CLA awards), as well as Blood Brothers in Louisbourg, (long-listed for First Nations Communities Read.) Kirkus Reviews has called Philip’s 2017 Middle Reader, The Kingdom of No Worries, “a parable for our time.”

Philip and his family, (including their all-white cat, Ollie, named after Dickens’ Oliver in Oliver Twist), live in Brockville, Ontario, where Philip continues to write novels and compose music.

If you are interested in scheduling a presentation with Philip, please contact Leila Merl at leilamerl28@gmail.com and see our “Author Visits” page.

Silver Birch Award in the Forest of Reading Nominee (OLA) 2015

Red Maple Award in the Forest of Reading Nominee (OLA) 2010

Visits to schools and libraries throughout Canada